I remember when I was looking for a nursery for Baba. It was not easy and there was so much to think about. That is why I wrote about how to find the perfect Day Nursery. It can be quite overwhelming for a first-time mum. And places are sometimes difficult to secure! I personally visited a dozen of establishments before finding the right one! It took me a long time, but there is no day I regret this choice. Baba is a happy baby and he loves going to his nursery three times a week when I am at work. Do you feel the same with your local nursery? Then, time to recognise all its hard work! Vote For The Community Nursery Of The Year today with Chemist.co.uk! 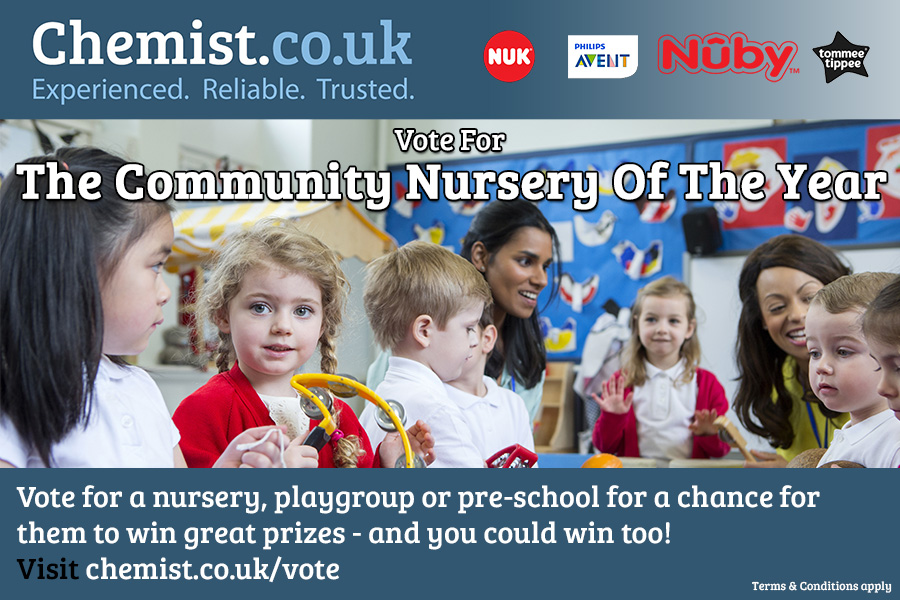 It’s difficult to let it go…

After one year on maternity leave and spending pretty much 24/7 with mon bébé, it was not easy to let it go and go back to work. The first few weeks were especially difficult as I had to get used to a new routine. Plus Baba was quite small and often ill.

I was torn. Feeling guilty to leave him so young, but yet decided to carry on my career. I am not very ambitious when it’s about my work and have not intention to go up the ladder. But I still think it is important to return to work so that I can have a balance. Being a mummy at home is not for me.

So I had to find THE nursery of my dreams! Well, it doesn’t work like that. If it was the case, it would have been an establishment close to my work so that I could pop in anytime. Imagine! The decision was made that Grumpy Boyfriend would do the drop-off and the pick up as his work hours were more flexible than mine. So not quite the one, but pretty much there! We love Baba’s nursery and we are so happy we chose this one!

Why I love Baba’s nursery?

Last but not least, the staff really needs a medal for looking after my little one. As nice and easy-going as Baba can be, I am fully aware that he can also sometimes be a diva! I reckon all the members of the nursery have had a taste of Baba le petit singe, running away everywhere, probably throwing his food on the floor if he decided not to have it and being a bit stubborn… And some of the staff must have had some scratches on their faces. He just loves grabbing people’s features at the moment!

So it’s time to say Merci to them! I know it’s their job, but I think all the staff is going beyond it without a doubt!

Vote For The Community Nursery Of The Year with Chemist.co.uk!

Do you feel the same about your nursery? Do you think it’s important to say thank you and give some support to some fab local nurseries? Then, it’s time to vote!

Chemist.co.uk asked Britain to nominate the most deserving Nursery for the title of Community Nursery of the Year.

After some amazing nominations, they have created a short list that you can see here.

Make sure you vote for your local nursery, they could win great prizes and there’s also a £50 voucher to be won every week throughout May for one voter chosen at random!

Don’t forget to tell your friends to vote too!

Fabuleux, right? By voting for your local nursery amongst the list, you could support a great nursery which deserves to be recognised and you are in as well to win a voucher to spend on the website! So what are you waiting for!? Go for it!

Plus, we will give some extra kisses to people who vote for a certain nursery called ‘Pixie Day Nursery – London‘, the fifth one on the list… It’s our favourite! Don’t ask us why! 🙂

Thanks again for reading our post ‘Vote For The Community Nursery Of The Year’. Don’t forget to come back tomorrow for a new Baba Fashionista post with a fab Frenchie GIVEAWAY!!!

Disclosure: This is a collaborative post. We received a voucher in exchange for this post but all opinions are my own. We do love our nursery! Well done to them and a massive MERCI for being part of the famous Frenchie baby’s education! And making Frenchie Mummy relieved to see a happy baby every day