We have never driven a hybrid car, so we were very eager to check it out and see how it performed compared to other SUVs. 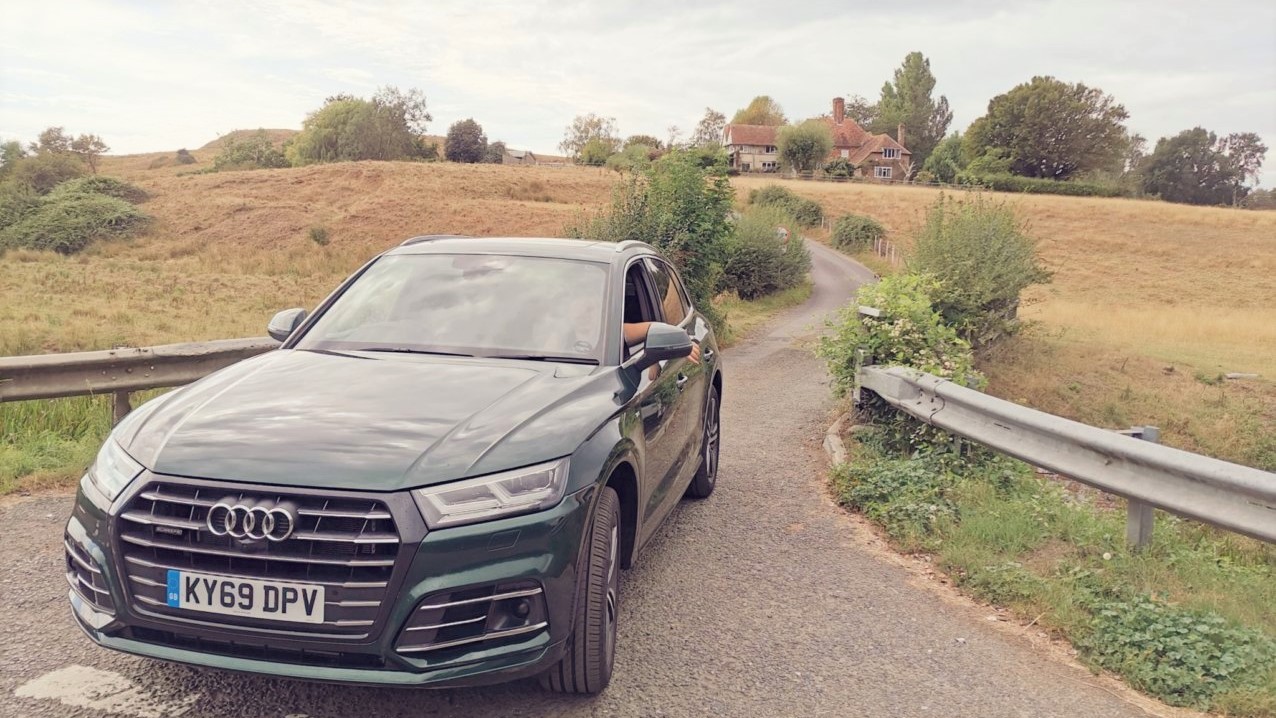 Promising to be of a new kind that’s cleaner, cleverer and more practical for daily use, the Audi Q5 55 TFSI e quattro S has some elegant lines as well as many fabulous features.

Our model came in a beautiful Azores Green colour. 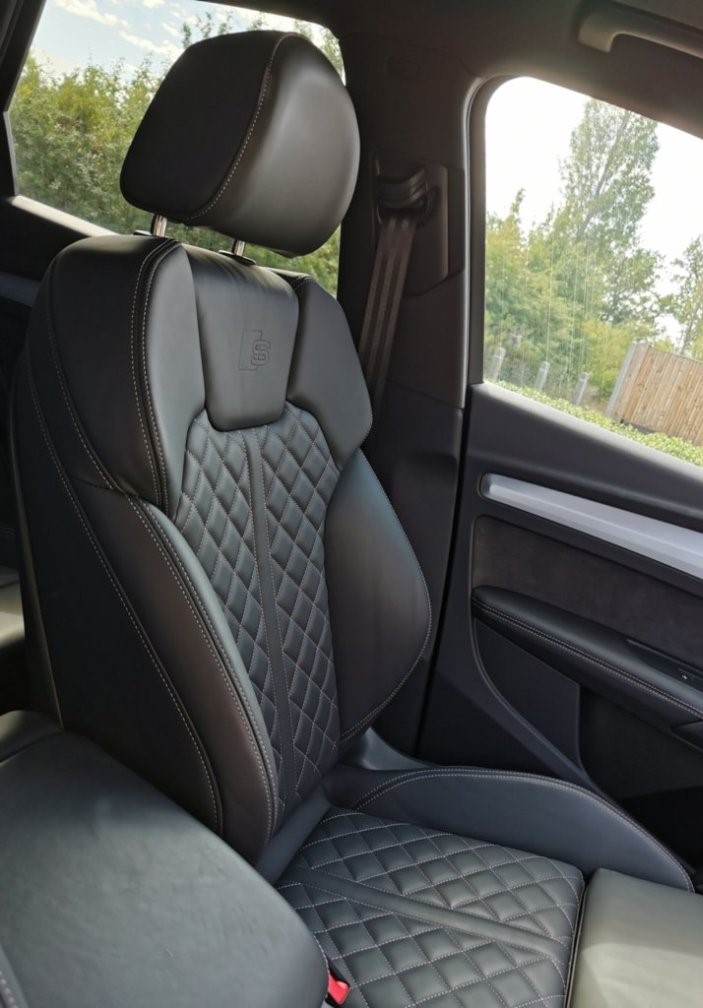 The interior was made of black fine Nappa leather with ‘S’ embossing.

And we got the whole package with many options: a tour pack, a parking assistance pack, a panoramic glass sunroof et plus encore! I’ll show you! 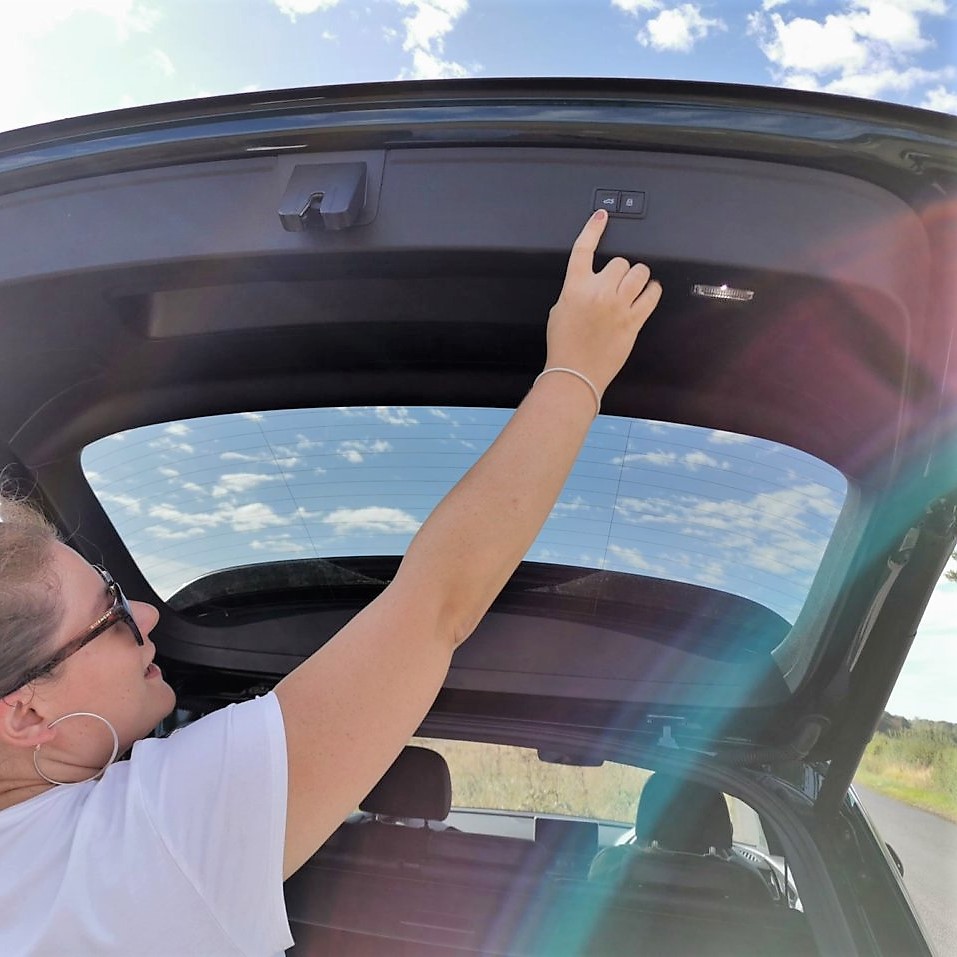 On the outside, the car has sharp looks and just oozes class and refinement – alloy wheels, LED lights. 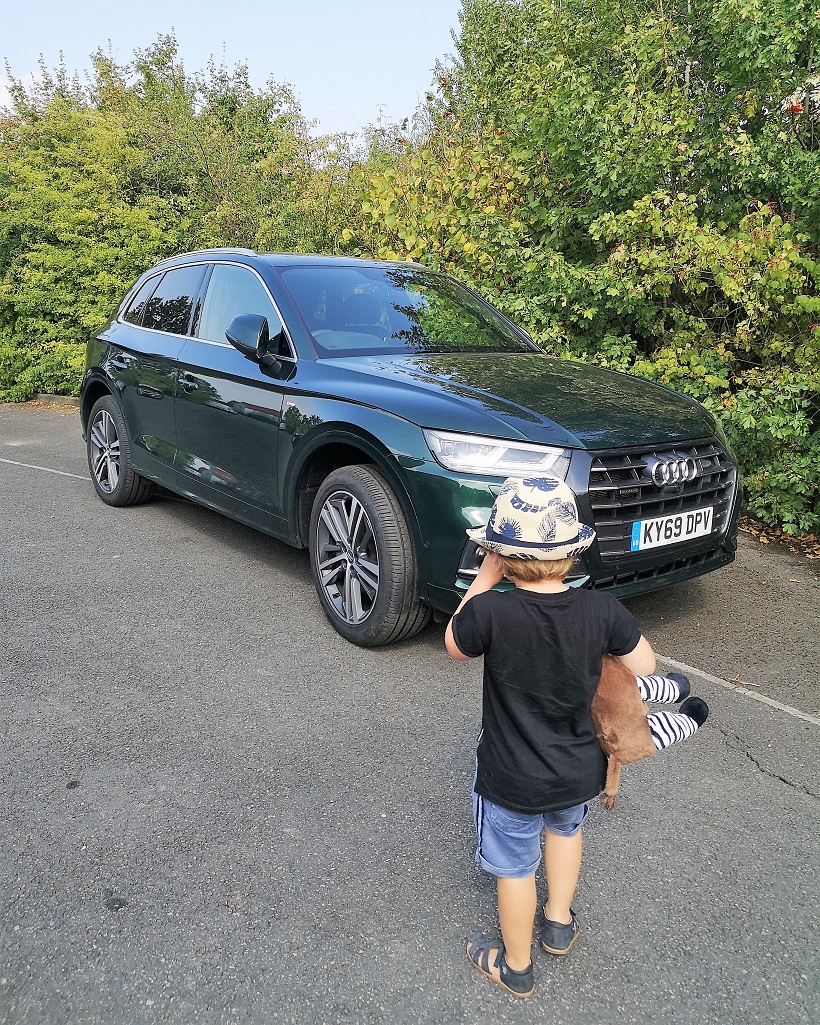 I was wowed by the colour while Grumpy Boyfriend was well excited to test its speed! It is an imposing machine that has some stylish look!

The interior is smart and comfortable, and well-sealed (keeping road noise to a minimum).

There’s a brilliant digital cockpit with forwarding and rear cameras, to help with parking and sat-nav. 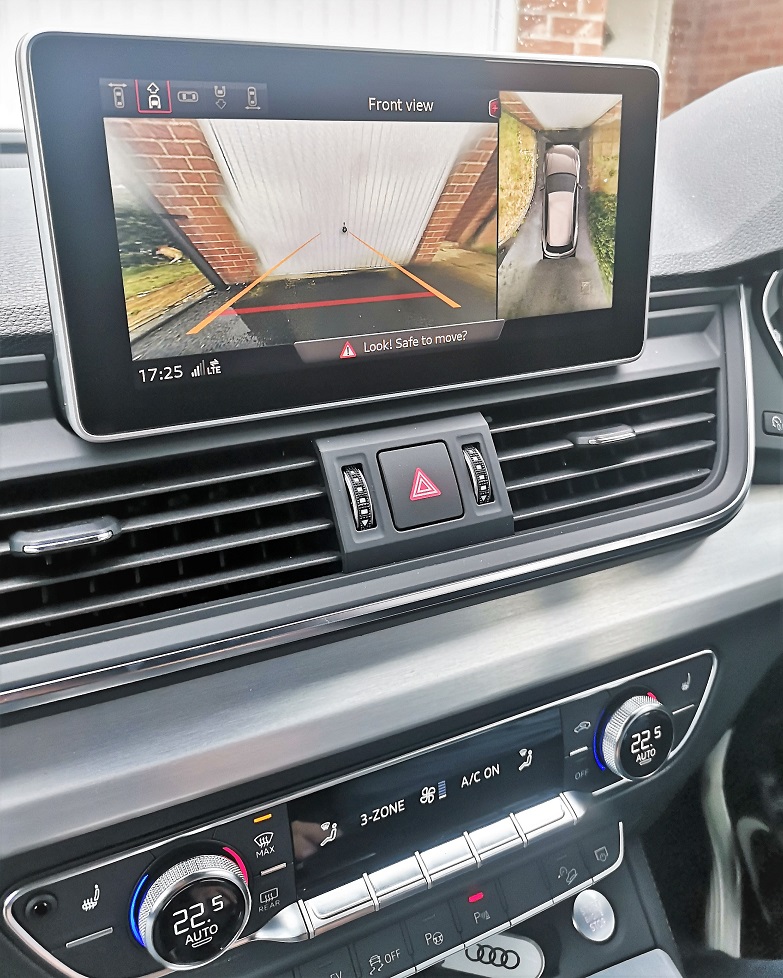 Une autre chose we liked? The Bang & Olufsen sound system and the leather upholstery. The sound quality was amazing! 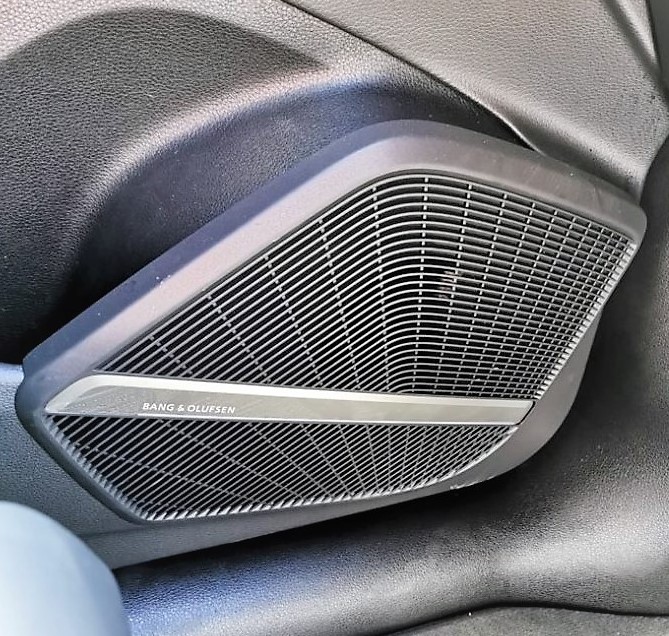 We were eager to try it so we decided to have a go the same day it arrived on the driveaway!

We had no problem using the Isofix connection to quickly pop in the car seat. 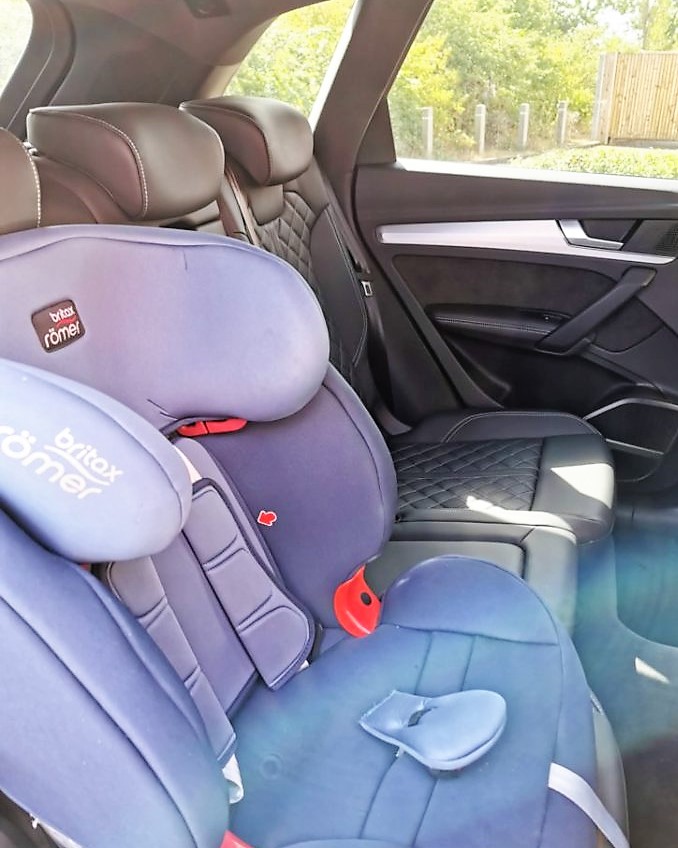 The boot space contained a bag of charging cables and gave us around 400 litres of space. Some might argue it is a bit petit, but we just had enough for a mini-getaway and a couple of suitcases.

We could also fit in Baba’s bike. 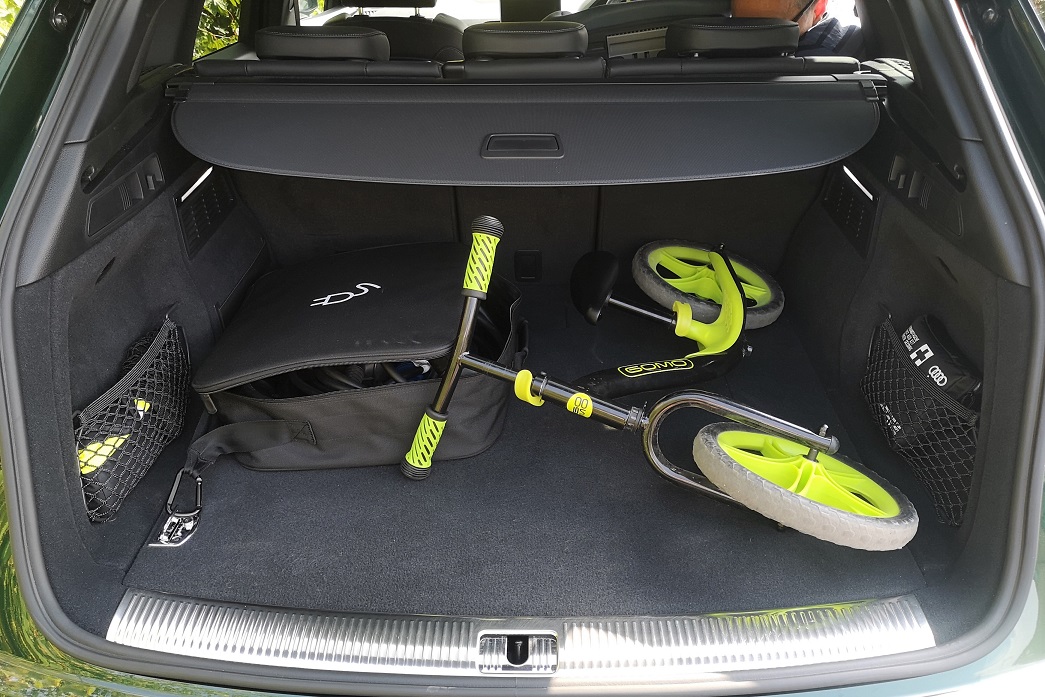 We’re not experienced with hybrids so this was a refreshing and eye-opening experience and made us think for the first-time about running costs vs upfront costs.

The 55 version comes with a 2-litre turbocharged engine and a 14kwh battery, and you can definitely feel that combined 362bhp when you hit the accelerator. 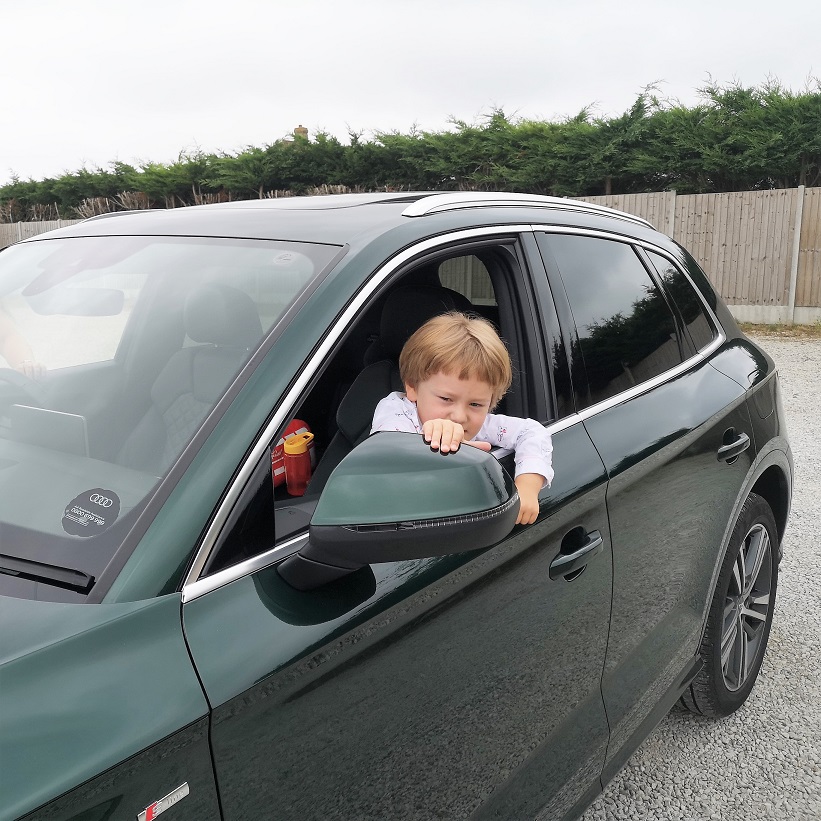 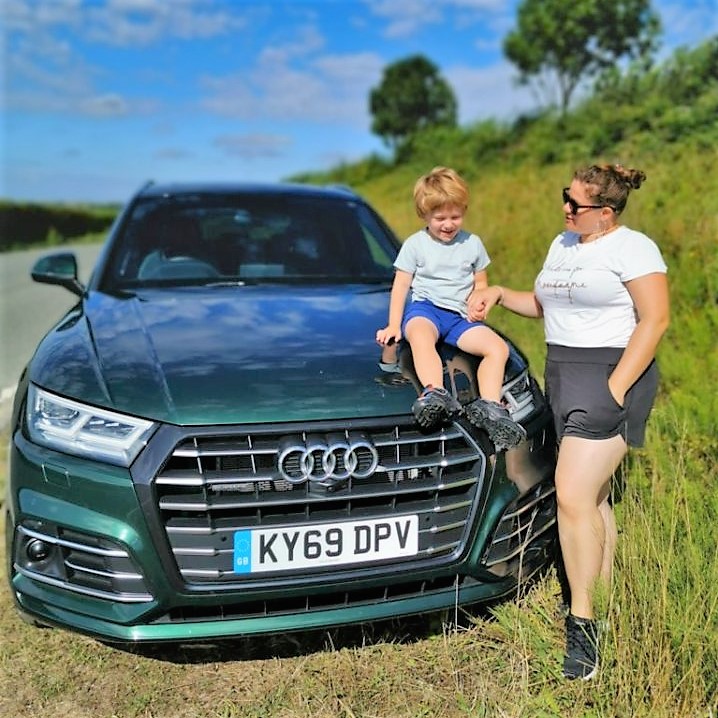 There’s plenty of pace in every situation, and as the engine is so relatively quiet, you often don’t realise that you’ve gone from 0 – 60 mph in just over 5 seconds! No need to say that the boys had a blast on a quiet country road… We obviously played it safe, but the driving was very comfy. The car was quick to respond! 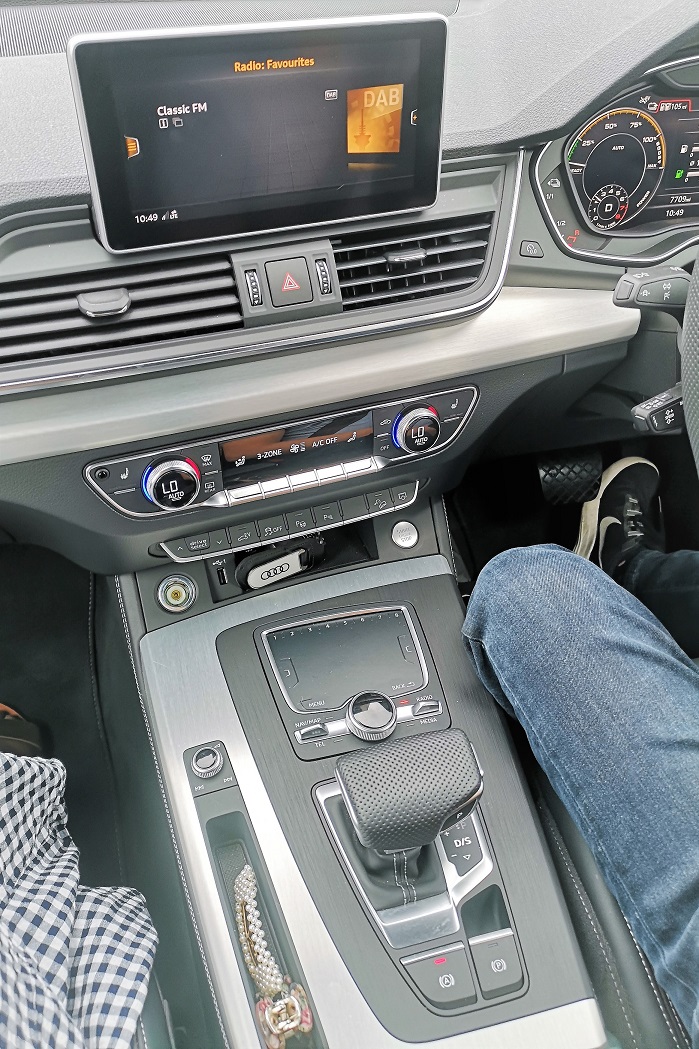 Handling this 4WD was superb around bends and the suspension really cushions any bumps in the road. That being said, it’s a somewhat heavy car (about 2 tonnes), so although it never feels sluggish, you’ll notice that extra weight sometimes. 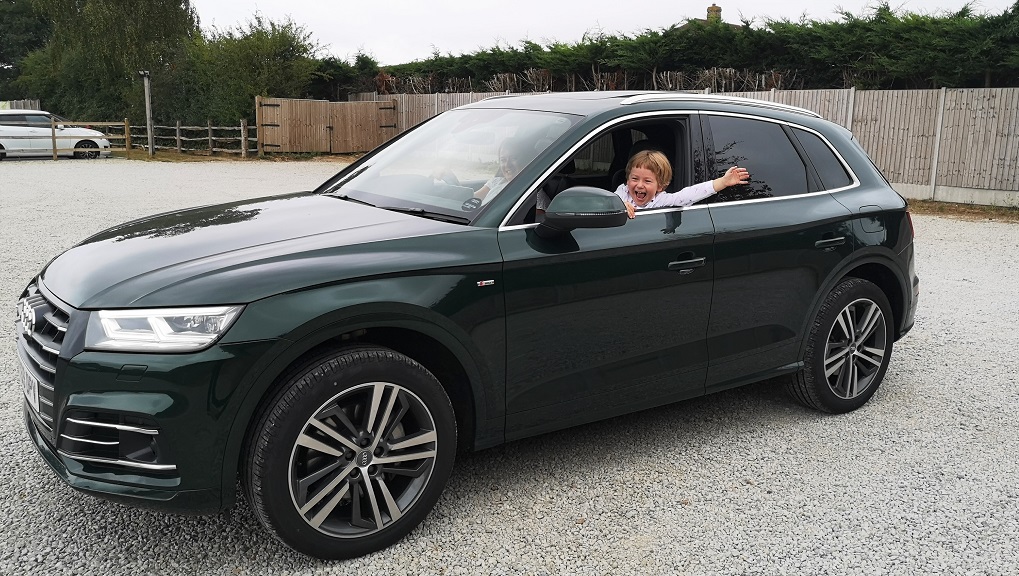 But Grumpy Boyfriend said that braking was effortless, apparently supported via the clever electric motor.

And with the high-ride and overall composure, we felt safe at all times (and somewhat jealous of any current owners!).

It was also super easy to plug in the car and we had full charge after 6 hours. So we also tested the electric mode. 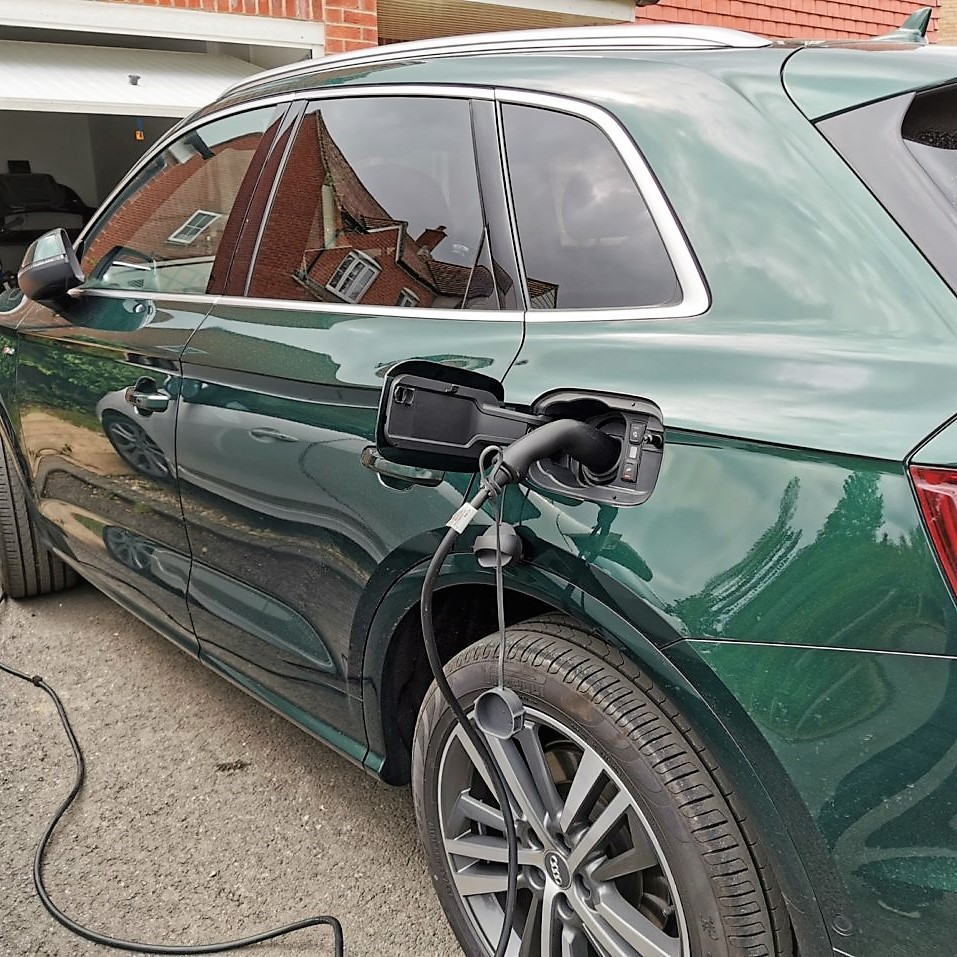 Apparently, you can do motorway speeds of around 80mph, but we only tested this mode around town and country lanes.

And let me tell you that it is impressively quiet and quick, plus emissions-free. That is one of the many avantages of the Audi Q5 55 TFSI e quattro S! 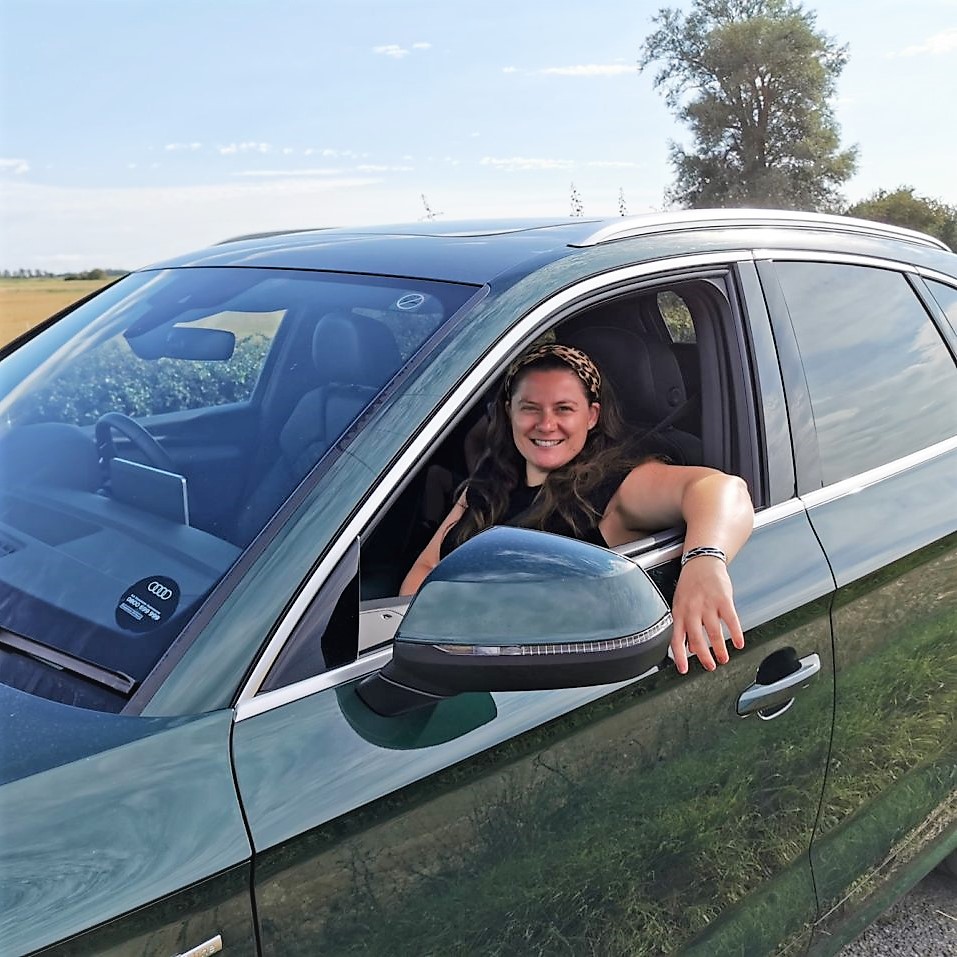 If you use your car to only commute under 10 miles away, you would literally never need to visit a petrol station! But you can also drive it on hybrid mode if you want to save l’électricité. 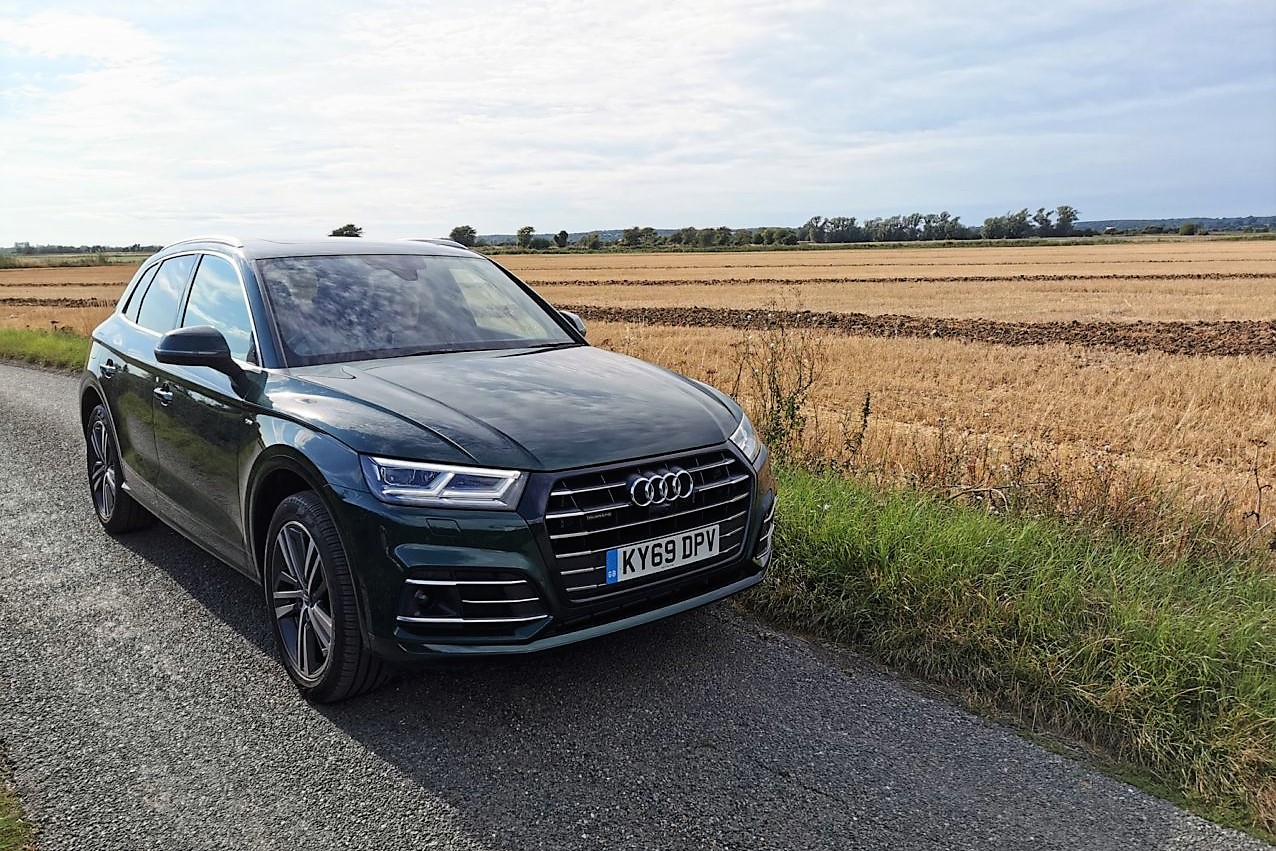 And pour être honnête, charge points are everywhere these days. We even found one right outside The Potting Shed!

If you install a wall box at home you can charge up in half that time (which apparently only costs around £500 to install, so if you’re forking out more than £50k on a new car this would be something I’d definitely recommend). 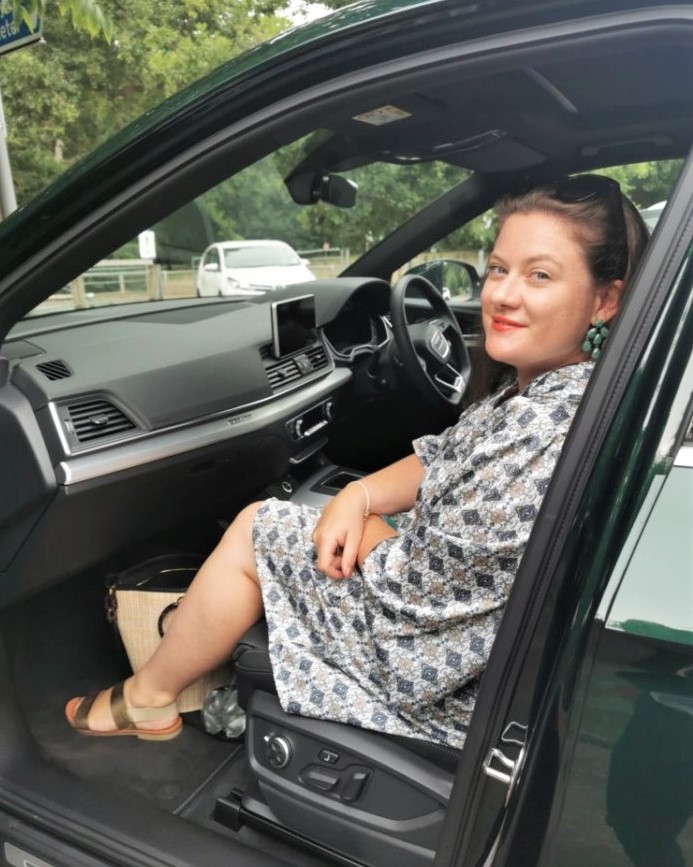 But most of the time we were using the fuel-efficient hybrid mode (as some of our journeys were beyond the limited range of EV mode) which adjusts the power based on some smart and sophisticated technology. 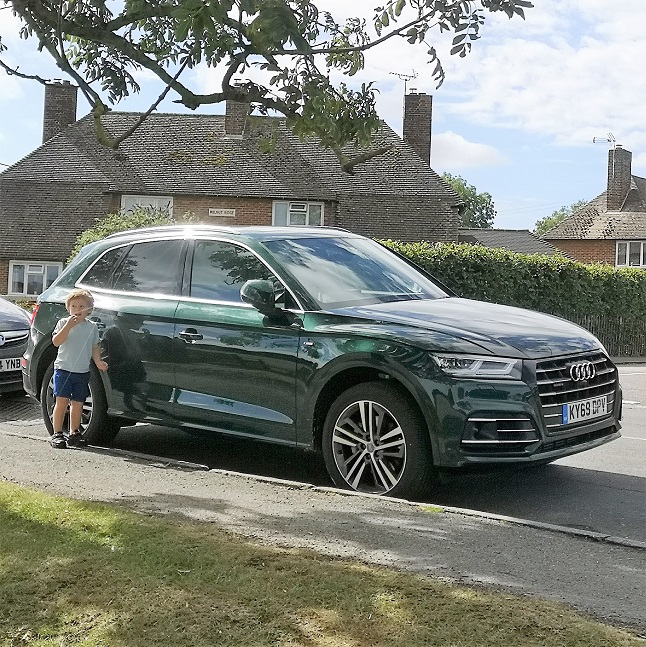 The mpg readout was telling us that in urban driving we were getting about 35mpg, sometimes more or less. Grumpy Boyfriend told me that the car delivers under 50g/km CO2, so it has some tax savings potential for lucky employees or savvy business owners! 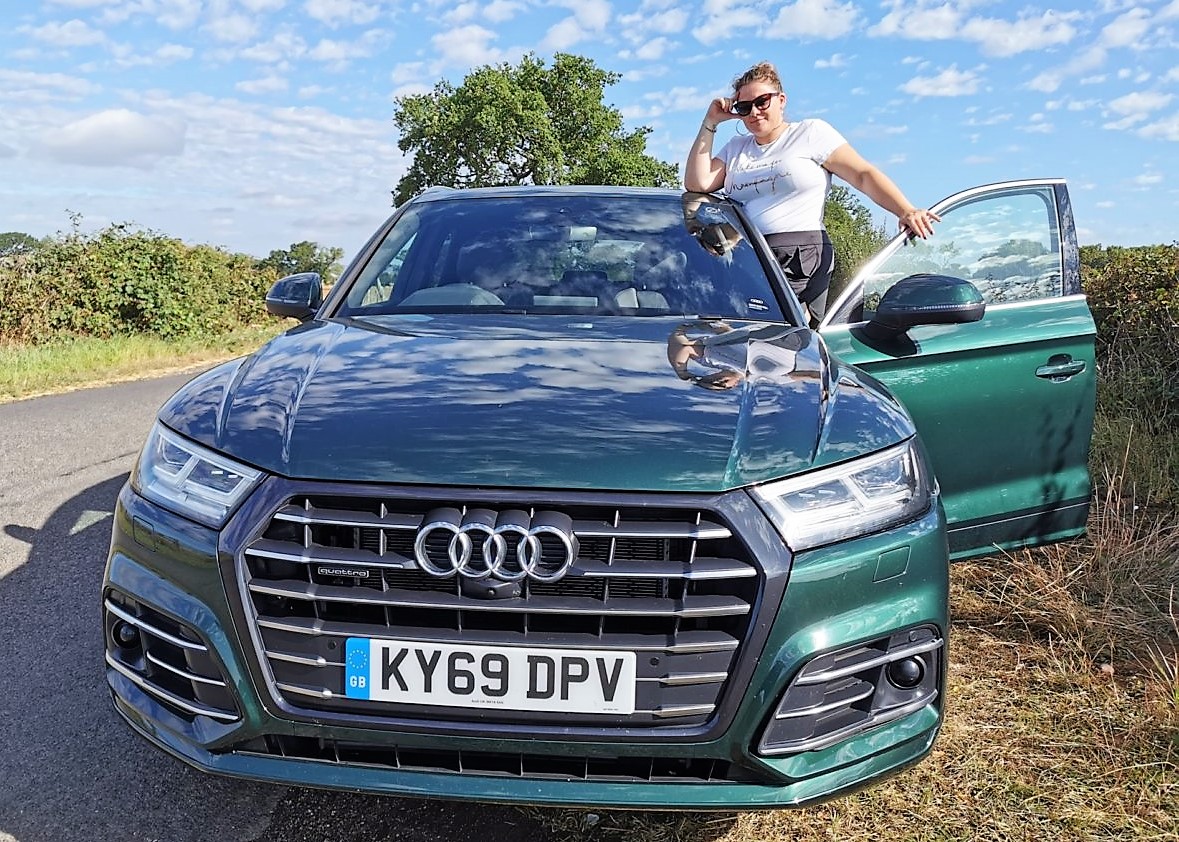 Not only une bonne option for adventurous families like us! 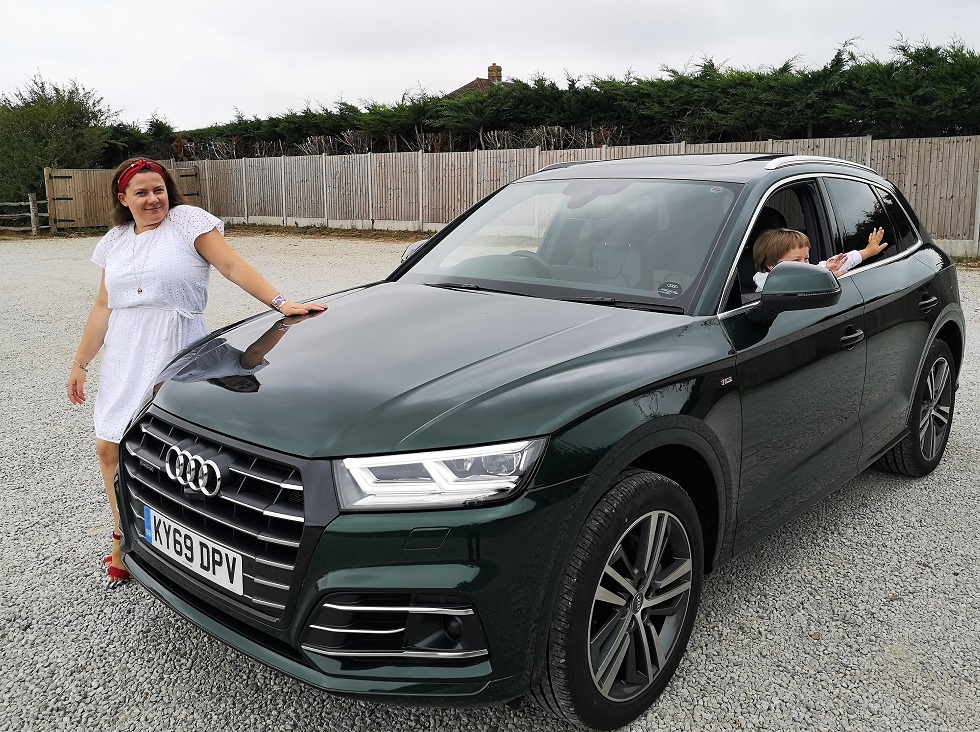 It makes an attractive choice to families and commuters/company car drivers. 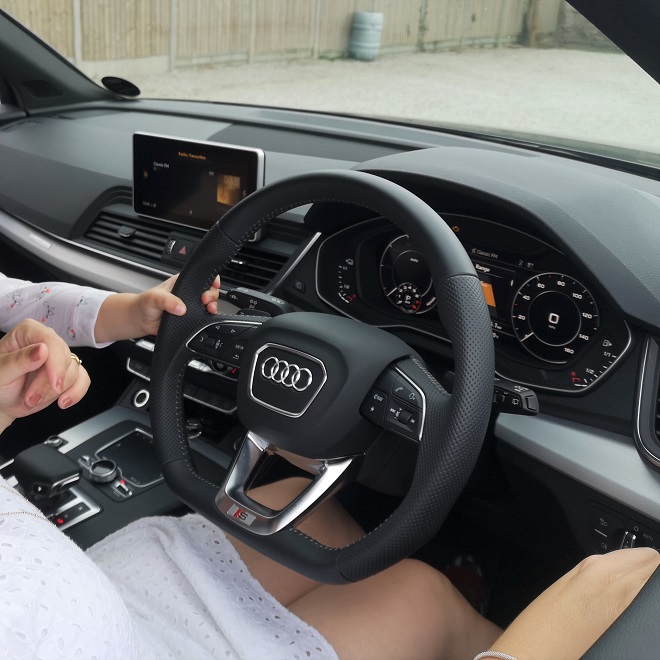 Last point from me! I have never really understood all the jazz about electric cars. I always had in mind, it would be a pain more than anything else. But quite frankly, the Audi Q5 55 TFSI e quattro S changed my mind! 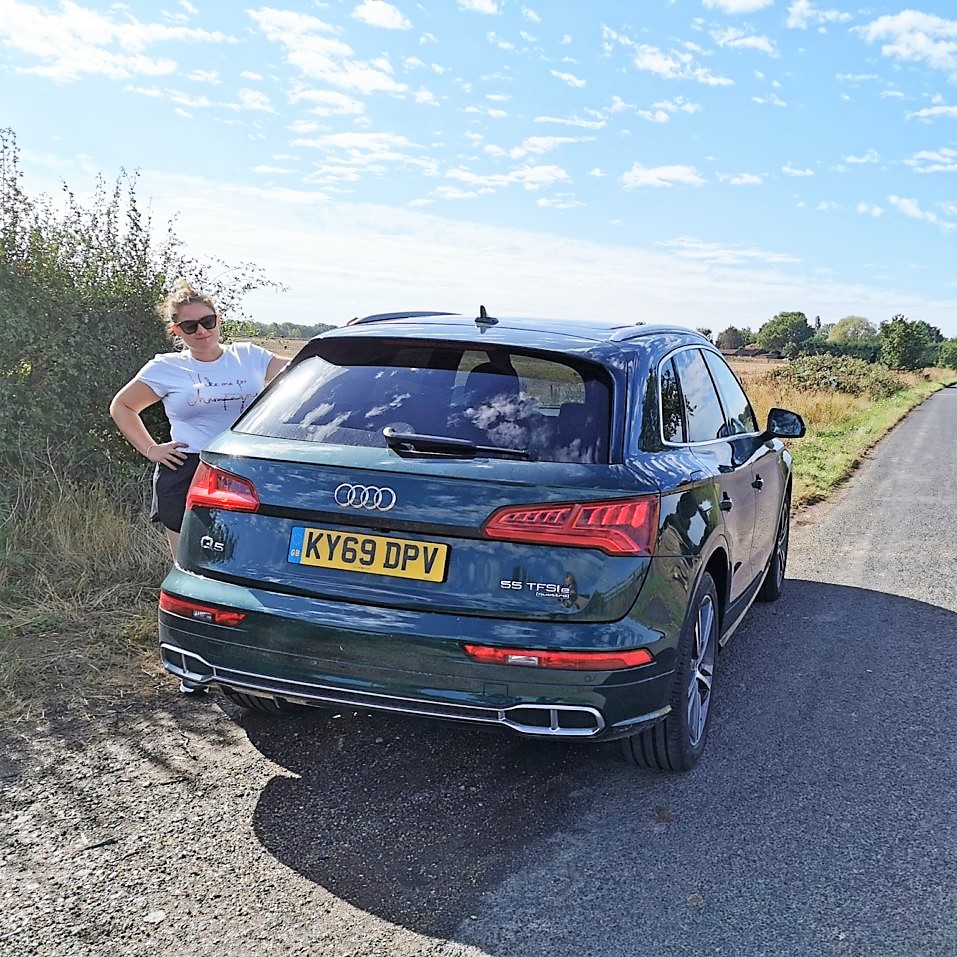 And for a maman like me who will mainly do the school run and the occasional (ok maybe regular! ?) shopping trip in town, I can see how an electric car or a hybrid would make a good option!

We really enjoyed driving the Audi Q5 55 TFSI e quattro S for a week! It is a lovely family car that can take you on many adventures!

Priced from £50000, it is certainly an investment, but what a fabulous one!

Disclosure: We tested driving an Audi Q5 55 vehicle free of charge for a week. And Grumpy Boyfriend is very impressed!