‘What the hell is this Frenchie Mummy on now?!’ I can imagine you, readers. You are wondering what I am talking about. Frenchie nanny is coming to London!

Oui, my very own maman is coming to visit us this weekend as she very much wants to kiss the Frenchie Baba. You know that Frenchies are obsessed with kisses, right? Plus the dearest maman has not seen le bébé in months. So I, telling you that she is super looking forward to it is a euphemism! At least. I bet you that I soon she will arrive at Saint Pancras, she will just grab le petit Baba, pinch his big cheeks and kiss him all over the place. And him to give me this look… 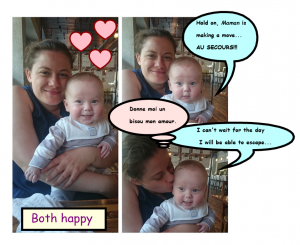 I am such a bad daughter, talking about my mum this way. I should not joke about it, especially when she doesn’t see much of her grandson and I feel quite guilty about it. I nearly added to this post title something like ‘Watch out les rosbifs!’ as a joke, but it would have been extremely sarcastic… And that not me at all, right? ?

Let’s be honest, my maman is not that bad. Ok, we have very different lives. I am sure she still wonders what I am doing with Grumpy Boyfriend. Don’t get me wrong, she likes him and finds him very funny but she must think that he is bizarre. My mum will never be rude and tell me anything bad about mon homme but it’s clear that she pictures him as a weirdo…

So maman is going to turn up. Au course I am happy to see her, but somehow, some parts of me are not feeling like jumping in the air.

C’est simple, I know that my mum will find a lot of stuff not to her taste as soon as she will pass through the door. Here is a (non-exhaustive list):

And I will have to explain myself. When Baba is my son and clearly, I do what I want… And wait to see her face when she sees our sleeping routine!

I better stop here! Otherwise, what kind of image will you have of Frenchie women?! To be totally fair, I am happy to see my mum. We will have a brilliant time and she will be over Baba all the time anyway. We will be fine!